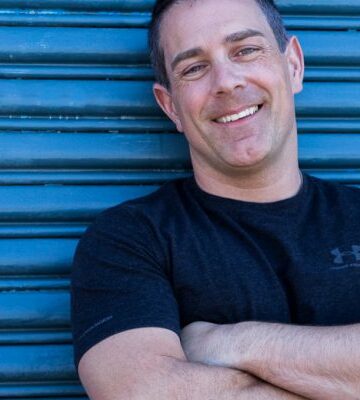 While enrolled in Human Kinetics at UBC Chad left to start in the industry that he has always had a passion for: Personal Training! Chad started his training career in 2000 and after 10 years in the industry Chad became a co-owner of Rep1 Fitness. If you are looking to plan/organize a sporting event Chad is the MAN for the job. He has organized/trained teams in soccer, adventure races, bike races and rides. Chad will not admit it but he has more than one talent. Chad grew up on Vancouver Island playing various sports, but he excelled in football.  Football made it necessary for him to get into the gym at an early age and learn the ins and outs of the ‘weight room’. Being involved in the fitness industry he realized that he needed a sport that allowed him to continue his competitive spirit after football and he chose cycling! Chad likes to keep his fitness balanced with weights and flexibility but it is his bike that draws the most attention.  He likes to push his limits at the local Tuesday night race circuit but he can also found doing events like Fondos or riding his bike from Kelowna to Vancouver in a day!  Chad has a work hard/play hard attitude and he will expect the same from you in your training hour!

Click here to book a free consult and tour

What is your favorite piece of fitness equipment?
My heart rate monitor that counts calories… because it validates my extra glass of wine!

If you could have lunch with any famous person, living or dead, who would it be?
Mick Jagger. I always wanted to know the truth about being a rock star… that’s my second career choice.

What was your first job? And what did you learn at that job?
I had lots of small jobs like landscaping. I even cleaned and polished a dump truck once a week (for some reason it was always dirty). I learned that manual labor is satisfying but exhausting.

One of your early life accomplishments was?…
Winning the BC Championships for football in 1990! I think it was on the teams where we didn’t win a game that I learned the most though. Kids quit on things too easily and their parents let them… if things aren’t going well you should still show up and give your best! That is when you will learn some real life lessons like loyalty and teamwork… also how to lose and win gracefully.

What is the one ‘cheat’ food, or drink, that you can’t avoid?
All of them… I lack the willpower. But I have the drive to hit my bike on a regular basis and stay in shape that way. The older I get the harder just hopping on my bike becomes a solution though.

What are you known for professionally?
I think I am known for my personality… not just the good days either! Ha!

If you got off from work early Friday afternoon what would you rush to do?
If it is sunny… ride my bike! If it is the usual crappy Vancouver weather I like to online game… Sometimes blowing things up takes the edge off the day.

We evaluate your fitness, make a plan & you get your first workout for free ($150 value)